To make this page your home page, just drag the icon to the left of the URL in your location bar onto the "Home" icon in the "house" icon in your toolbar. Some browsers do this differently. You can always set your home page through the preferences of your browser.

The European aircraft giant is benefiting from popular new planes like the A320neo.
Mar 17, 2017 - Thomas Enders, chief executive of European aircraft giant Airbus, turned a boyhood obsession with airplanes into a fulfilling career and a thrill-seeking pastime. When he’s not skydiving, the German-born Enders, 58, loves to hang out with test pilots taking the company’s “new toys” for a spin. Test pilots, he says, “really embody the spirit of aviation today.”

Enders’ key achievement at Airbus might well be governance changes, which have reduced state meddling. Huma Rosentalski for Barron's

Airbus (ticker: AIR.France) offers all the toys Enders could wish for. Based in Toulouse, France, the company is best known for its roster of Airbus commercial jetliners, sold to airlines worldwide. It also makes helicopters, fighter planes such as the Eurofighter Typhoon, and launchers for Ariane space rockets. Airbus reported total sales of 67 billion euros ($70.8 billion) last year.

Since taking the controls on June 1, 2012, when Airbus was still known as European Aeronautic Defence and Space, or EADS, Enders has skillfully engineered much-needed governance changes to reduce the political influence of France, Germany, and Spain, which together own 26% of the stock. He has also presided over a closer integration of Airbus’ corporate structure and workforce, creating what he calls a “truly European company.”

But Enders, a major in the German army reserves, isn’t ready to stop. He wants to build on Airbus’ presence in the Asia-Pacific region, North America, and Europe. “The next prize is to become truly international,” says the CEO, who keeps in a corner of his office three shovels commemorating groundbreakings on new manufacturing facilities, including an assembly line in Mobile, Ala.

Airbus approaches this challenge on a solid footing. It had a backlog of 6,874 aircraft at the end of 2016, worth more than $1 trillion, versus a backlog of 5,715 for Boeing (BA), valued at $416 billion. For Airbus, which delivered 688 planes last year, that’s almost 10 years of production at the current rate. “This company has never had, in its history, such a competitive portfolio,” Enders says.

Airbus SHARES, which closed on Friday at €70.06, have tripled in value in the past five years as scheduled passenger traffic has climbed in the recovery from the global financial crisis, forcing carriers to renew or add to their fleets. Airlines worldwide are forecast to carry almost four billion passengers this year, up from three billion in 2012.

Airbus is expected to earn €2.63 billion this year, or €3.50 a share, rising to €4.64 a share in 2018. Cash flow likewise is projected to increase by double digits, as the company puts behind it problems that hampered production of popular, fuel-efficient aircraft last year.

Reported earnings fell 62% in 2016, to €1.29 a share, due to unfavorable currency effects and €2.2 billion in charges for the A400M military transport aircraft. Airbus is being penalized by European governments, its A400M customers, for late deliveries and insufficient “military functionalities” on the planes it has delivered, including a shortage of critical chips for the self-protection system.

The latest charge prompted Airbus to seek a deal that would cap its exposure. “We need to de-risk the A400M program,” Enders told analysts in February.

THE WUNDERKIND of the Airbus family is the A320neo (“neo” stands for new engine option), a single-aisle, narrow-body jetliner that can carry 186 passengers and offer fuel savings of up to 20% compared with previous versions. Airbus has booked more than 5,000 orders for the A320neo family of aircraft since its launch in 2010, making it the fastest-selling commercial-aircraft family in history.

Boeing was caught off guard by the A320neo’s success. It had planned to replace the 737 by 2030, but pressure from customers compelled it to launch its own fuel-efficient model, the 737 MAX.

The Airbus A350, a medium- to long-range wide-body jet that can accommodate up to 440 passengers, also is gaining traction. But the A320neo and the A350 both encountered production problems in 2016. United Technologies ’ (UTX) Pratt & Whitney unit, an engine supplier for the A320, struggled to meet delivery targets for its geared turbofan engine. At the same time, a contractor providing cabin interiors for the A350 couldn’t keep pace with demand. 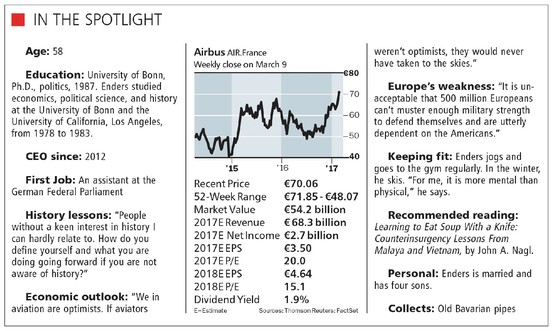 “We have thousands of suppliers,” says Enders. “It is inevitable that some suppliers will face challenges. It doesn’t help when you are in a critical situation to just beat up on suppliers, or insist on contract. You can only increase the ramp-up if your supply chain can follow.” He notes that Airbus has tried to help suppliers that faced issues.

In addition to the A400M, Enders’ other big headache looks to be the A380, a double-decker, wide-body plane powered by four engines and designed to carry more than 500 passengers. It is a big hit with travelers—fan-produced Websites and blogs laud its comforts and amenities—but high operating costs mean that orders have been hard to land. Only 208 A380s have been delivered since the model entered service in 2007, and 109 are in the order backlog.

Ninety-three A380 planes, or half of those flying, are operated by United Arab Emirates-based carrier Emirates; the airline has 49 remaining in the order book. The list price of an A380 is $436.9 million.

Airbus last year said it planned to scale back A380 production, but Enders says the company is committed to the plane even though it isn’t suitable for every carrier. “You need to fill these aircraft,” he says. “If you fill it 80% or more, it is a money-making machine. We are hanging tough with the A380.”

Trading Center
There are no featured aircraft
ADVERTISEMENT

Trading Center
There are no featured engines

Upgrade Now Not This Time